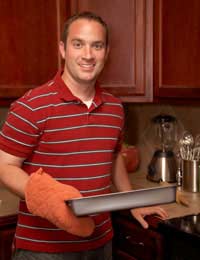 To be fair, there are probably a million more exciting things to be thinking about during your time at university than the pros and cons of your oven. However, no kitchen would be worth stepping into without a functioning oven and mealtimes wouldn't be quite such an event if you had to tuck into cold dinners every night. As with all kitchen appliances there are a number of different types of ovens, or oven and hob combinations, and it's a good idea to get fairly well acquainted with yours before you attempt any gastronomic extravaganzas for your friends.

This is the one you'll find in most kitchens: an upright electric oven with four plates on the hob, a grill section and a main oven. They're fairly straightforward to use but all ovens are different and each will have its own quirks. Some will cook things more quickly, some will be fan assisted (which means food cooks quickly as the air is constantly circulated around the oven) and some will just seem to take forever to heat up.

The same set-up as an electric oven but powered by gas. Some systems will have a gas hob and an electric oven. Many people prefer gas hobs as they heat instantly and it's easier to control the temperature. However, it's all down to personal preference and what you get used to. If you have a gas oven that requires lighting manually, always use a proper gas lighter and not matches - for obvious reasons!

This is where the oven is integrated into the kitchen units and sits off the floor. You then have a separate hob either alongside the oven or elsewhere in the kitchen. The benefit is that you don't have to bend down to lift food in and out or to check it during cooking.

It's unlikely that you'll have one of these in a student house. They're bigger than a conventional oven and come with five or six burners on the hob and often two oven sections. Dream on…

If you're unfamiliar with your oven, chances are you won't be able to cook confidently. Even the most experienced chef can come a cropper when they're cooking with a different oven to the one they normally use. Here are a few tips to get you started:With a bit of oven know-how you can really cook with confidence. It doesn't take long to learn about the peculiarities of your oven and how to use it but it's time well spent.

How to Make Basic Sauces

The Quick Guide to Great Cooking