How to Cook Potatoes 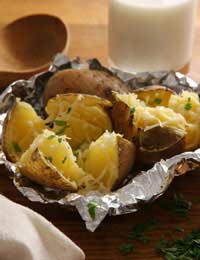 Along with pasta and bread potatoes are probably our most important carbohydrate. We can't get enough of them and this is most likely due to their huge versatility in the kitchen. From chips to mash, they are the perfect accompaniment for so many meals, as well as adding some starchy bulk to soups and stews. So, let's learn how to treat them with the respect they deserve.

Despite their ingrained nature in British culture, potatoes actually originated in South America. Sir Walter Raleigh is credited with their arrival in this country in the late 1500s and, whilst they were no doubt viewed as a terribly exotic addition to the dinner table, it took a while for them to catch on. This was largely due to the fact that no one really knew how to cook them and rumours were rife about the poisonous effects they could have, if eaten. However, things improved as knowledge grew and they were found to grow easily in these slightly less balmy climes. As such, they soon became a staple, especially amongst poorer people, as they were cheap and easy to produce and made a filling meal.

There are literally thousands of different varieties of potato and it's the starchy tuber that is cultivated and eaten. Different varieties will work better with certain cooking techniques but the main rule of thumb is to choose a floury variety for mash or roast spuds and opt for a waxy variety for boiled potatoes.

Potatoes really are the ultimate food in terms of the number of ways in which you can prepare them. Here's a quick guide to some easy cooking techniques:

It's easy to make your own oven chips, and healthier too.

There are obviously loads more ways to cook a spud and you'll find more recipes throughout the site. Boiled new potatoes, served with a knob of butter are pretty hard to beat, as is a simple potato salad scattered with fresh chives. You can sauté them, fry them, roast them and griddle them. No wonder most people list them as their favourite vegetable!