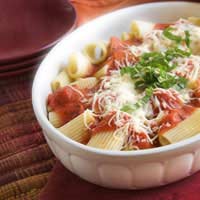 Cheese and eggs are both nutrient-rich and make great main courses for both vegetarians and meat-eaters. They're not as expensive as meat and can be used in loads of tasty recipes. Choose a mature cheddar for the most flavour - or experiment with other types of cheese.

Put some water to boil in a large saucepan and when boiling, add the macaroni. Cook for about 10 minutes, or as directed on the packet. Drain and set aside.

Place in the dish and sprinkle with the remaining cheese and the breadcrumbs. Cook for about 20 minutes until golden and bubbling.

Grate the cheese. Take a generous handful of both the bread and the cheese and mix together. Beat the egg with some salt and pepper.

Heat about 3 tablespoons oil in a large frying pan and cook the peppers and onion for about 5 minutes. Add the mushrooms and celery and cook for another 10-12 minutes or until tender.

Bake for about 25 minutes or until the top is golden and the pie is hot through.

When the oil is very hot carefully add the onions and potatoes. Sprinkle generously with salt and pepper. Toss them around to coat them in oil and then turn the heat down as far as it will go, cover the pan with a lid (or upturned plate) and leave to cook gently for about 20 minutes or until they're tender. Shake them around occasionally and make sure they're not burning.

While the vegetables are cooking, lightly mix the eggs with salt and pepper in a large bowl.

When the potatoes and onion are tender, add them to the eggs and mix lightly. Heat 1 tablespoon oil in the frying pan and, when it's hot, pour in the omelette mix. Turn the heat down as far as it will go and allow the omelette to cook, uncovered, for about 20 minutes or until almost all of the egg is set.

Now you want to slightly brown the top. To do that you have to turn the omelette over: hold a plate over it and turn the pan upside down so the omelette is turned out onto the plate. Slide it back into the pan that way up and let the underside brown for about 2 minutes.

Serve hot or cold with salad.

How to Cook Lamb